The White Pine Bureau was formed in 1915 to carry on an advertising campaign on behalf of the White Pine manufacturing industry (of the time) that would be supported by an assessment on their total lumber production.  The Bureau represented two White Pine organizations; The Northern Pine Manufacturers Association of Minnesota, Wisconsin, and Michigan; and The Associated White Pine Manufacturers of Idaho.  These trade organizations were located within the Upper Midwest and Northwestern regions of the U.S. and dominated by various mills and businesses owned by Weyerhaeuser Forest Products. The headquarter office of the Bureau was located in St. Paul, Minnesota. 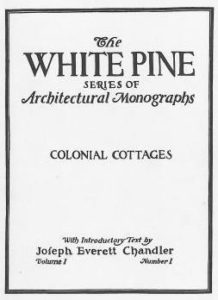 The flagship promotional piece developed by the Bureau was the White Pine Series of Architectural Monographs, a publication whose purpose was to encourage the use of white pine as a building material. The Bureau hired Russell F. Whitehead as the publication’s editor who was well known within the early years of design and construction type journals.  He had been named editor of The Architectural Record in 1912 and the Brickbuilder in 1913. Following the 1915 start-up of the Monographs with 3 issues, the frequency was increased to 6 issues a year (expect for 5 in 1919). Each publication featured early American buildings made of white pine, inside and out.  A general architectural style of building such as Colonial Cottages, or structures in a specific town (Portsmouth), or specific architectural elements that included doorways and mantels would make up each publication. Periodic design contests were also part of the Monograph history where specific end use structures made up the design criteria.  This included the design of a Roadside Tavern and a home of Eastern White Pine that would cost $12,500.

The high quality photographs, for the time, and the measured drawings of buildings and features made the series a popular success with its audience.  Over 9,800 architects and architectural designers received the Monographs at its peak.  Public libraries and universities around the country also received the publication.  Curiously, while the Bureau supporters were all located in the Upper Midwest and Western U.S., the content within the Monographs were locations exclusively within the Eastern, Mid-Atlantic, and even some Southern geographic locations of the country. After 10 years of support for the Monograph Series, the White Pine Bureau ended its sponsorship of the publication after the last issue of 1924. At that time, the editor, Russell F. Whitehead took over the Series as both editor and publisher with the assistance and financial support of Weyerhaeuser Forest Products Company through full-page advertisement insertions.  Mr. Whitehead also became editor of the architectural journal, Pencil Points in 1924 in addition to working as a practicing architect with the firm of Clark & Whitehead. In 1928, the title of the publication changed to The White Pine Monograph Series on Early American Architecture, which changed again in 1929 to The Monograph Series – Recording the Architecture of the American Colonies and the Early Republic.  And at the end of 1931, the publication ceased to be published as a stand-alone printing after 98 issues.  In 1932, the series was absorbed into the previously-mentioned Pencil Points journal as a 10-15 page insert, where Mr. Whitehead remained as editor until 1940.  These inserts were of single, architectural topic focus and appeared in this monthly magazine approximately 6 times per year.  In 1941, the original series disappeared altogether from print.  Pencil Points merged with Progressive Architecture in 1943 to become “the leading voice in architectural and graphic design when modernism flourished, introducing key players from America and Europe”.

In 2006, the Northeastern Lumber Manufacturers Association (NELMA) resurrected the Series as part of their 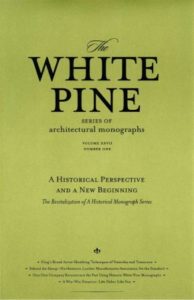 marketing and communications program on behalf of the Eastern White Pine manufacturing membership.  The “new” series maintains the look and feel of the original publication, while bringing today’s trends and examples into reference regarding the use of this sustainable and versatile wood species.  The White Pine Bureau was far ahead of its time when it created the White Pine Monograph Series for marketing purposes in 1915.  With the original series lasting 27 years, this fascinating publication continues to be of interest today within the architecture and building design community.

NELMA is pleased to house all of the original, historic 98 booklets along with the issues published since 2006 within its reference library.  We gladly extend the Series availability by providing each of these online for reading, with printing capabilities.

Maine Coast School of Traditional Woodworking is Open for Enrollment

The Builder’s Companion: A 1931 Guide to Classically Beautiful Architecture

Vol I Issue I Colonial Cottages

Vol II Issue I – Houses of the Middle and Southern Colonies